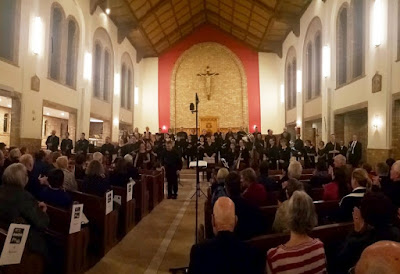 Elation is an apt response to a Bach cantata in full flight so no surprise that I felt it at St Christopher's with Andrew Koll's Canberra Bach Ensemble. Andrew's been running these performances for a few years, each time with a chamber orchestra (23) and a decent choir (32) and some solo singers (4). This time it was Bach Magnificat and Meine Seelerhebt den Herren and Tonet ihr Pauken, Erschallet Trompeten. I know at least some of the last as a favourite, Christmas Oratorio. Bach repurposed this one. The works start and end with, and perhaps feature in the middle, a choral work of volume and exultation. In between, the soloists sing of Mary or Maria or other as the theme states. There was one solo organ passage with hidden organist that had the performers looking at a loss, but otherwise, it's an impressive sight. 50+ performers playing works of elation and depth and busy, sequenced familiarity. Bach is familiar to the modern ear even if one work isn't. The instruments are all baroque (so bassist Dave was on a 5-string with gut and baroque bow) and they got workouts. I heard the busy-ness for Dave and frequently cellist Clara so was not surprised to see Dave's part, but it was forboding none-the-less. And endless stream of a moving pattern, crochet-2 quavers, over the page with Da Capo to mark an end of sorts. They did great jobs with considerable concentration. The whole group sounded great, if just a little washed out in the reverberant environment. The winds were from Australian Baroque Brass with their odd trumpets and troms; the choir was lovely, nicely strong with preponderant sopranos; the featured soloists take a great load and did it with panache and I remember a particularly fascinating piece for massed females, three in concurrent, contrapuntal song; the orchestra just sat and spelt out the support with ease and sometimes features, several times from Aaron on Oboe d'amore; the continuo was delightful from Ariana; the leadership was joyful from Bianca, although I don't remember any solos. Too bad. I'd like to have heard her featuring again. The group is booked for the Bach Festival in Leipzig in June next year, so it's not just me who recognises they are doing something right. Just lovely.