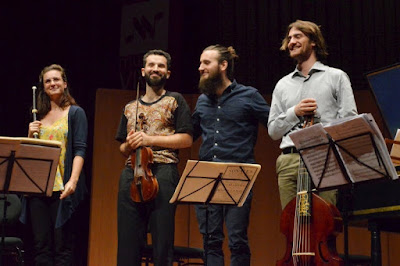 Nevermind the grungy stage clothes. (Not really grungy but street wear, not stage black, but I couldn't resist the early reference). The Musica Viva host introduced the concert with a plea for younger audiences. Nevermind also spoke of this as the first issue in their meet the musicians session after the concert. Despite the casual clothes and long hair and chatty interactions with the audience, this was a genuine and fabulously satisfying baroque ensemble which, at least for our concert, was playing quite obscure French music from the court of Louis XIV. I knew of Couperin and Telemann but not so much of Marais, Quentin, maybe of Guillemain. On the other hand, I noted the no-longer-youthful Nirvana reference in the band's name (Nevermind is the breakthrough Nirvana album that starts with Smells like teen spirit, no less, released 1991) to several in the audience and none recognised it, so maybe more work needs to be done on both sides. But nonetheless, nevermind, the music was delightful and the performance was blissful. From back stalls, the balance was not easy (strong on violin and viola da gamba but a struggle for harpsichord and flute) although I was surprised how present the overall sound was in such a large space. I moved up to the front row for the second half and the details became evident, the harpsichord and flute became more obvious, the easy playing and quick smiles of the group became infectious. I guess this is how it would have been played in the Hall of Mirrors or otherwise. Sometimes quick and sprightly, mostly fairly quiet and dignified, even the lively or noisome passages still tame to our ears, the tones lovely, soft, the notes all formed and shaped, each one, so delicately. That really got me, how each note took on a life of its own, even in a phrase, not like a quick line on steel strings in a large modern ensemble. Much more fleeting, lithe, light, interactive. Nevermind would probably say "conversational". They called one album that, and they mentioned it in their patter. I was impressed to hear harpsichordist Jean is a decent jazz player. And those smiles. I couldn't see if Jean was smiling while playing although his face suggested it later, but Anna and Louis were playful in performance and expressed it with frequent, sly or open smiles, even, in Anna's case, from behind the flute's mouthpiece. This is a band that enjoys their playing. Maybe that's an answer to another question. I wondered how such light, toneful music could be so seductive in courts of the period. It's nothing like modern music that we think is seductive, but then neither were the formal dances or the stuffy costumes of the time. I guess we just have to accept the difference in their time and their place, the courts and aristocracy of Renaissance France against our open, casual period. To some degree, if only outside France, that aristocracy remains, although tempered by a need to offer a democratic face. Our wealth resides differently now and is protected through different processes. But the music remains delightful and the take on it by Nevermind was an eye-opener. I hope they kindle interest amongst younger listeners as I hope the current audience becomes more aware of newer popular forms. As on climate, we must remain hopeful.