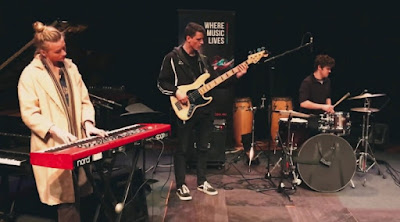 Jazz is undergoing a revival of sorts, with commentators foretelling a new "Golden Age" led by artists such Kamasi Washington and Thundercat, bringing together afro-funk, spiritual and acid jazz into the broad church of the genre. While there are still strongly traditionalist camps harking back to the New Orleans, enclaves of newer and more diverse musical influences are starting to emerge in Los Angeles and London, to less likely hot-spots such as Istanbul and Baku.

Q: What were your motivations behind starting one-seventeen? Can you tell me a bit about your backgrounds?

Peter and Jamie originally knew each other from their Newcastle schooldays and went on to audition together for their place at the ANU School of Music. They went on to play around with a few bassists, but Haris was the standout and they asked him if he wanted to commit to a musical project and see how it worked out. Stylistically they all meshed and decided it made sense to get together permanently. One seventeen was the number of the room they first formed in and played together as a trio

Q: What sub-genre of jazz would describe yourself as and why did that resonate with you?

We're a mixture of Funk, Fusion and Nu-Jazz. Stylistically, we draw from the stuff we listen to and try and build on that legacy. Jazz is a genre which is constantly evolving. The first jazz musicians were studying classical and romantic music. There was always a muse basis and that eventually developed into Jazz fusion. Now modern jazz is wanting to study and pay homage to the generation preceding it. It's always good to start from the ground up with the fundamentals and respect the traditional, but you don’t want to stay entirely the same.

Q: Who are your musical influences and inspirations?

Jamie describes one-seventeen ethos’ as a trying to achieve a "good representation of live moderns, with lots of energy, groove, but plenty of messing around with tricky rhythmic stuff". Variously the band takes inspiration from Weather Report, Herbie Hancock, Dave Weckl, Spyro Gyra, to more modern heavy weights such as Louis Cole and Hiromi.

Q: What do you think of the Jazz scene in Canberra?

Pleasantly surprised with the amount of jazz that’s happening in Canberra, but feel there could be more of a modern element. You have to move beyond standards and doing straight-up jazz because breaking out of that mould can bring the opportunity to define a niche within the Canberra Jazz community.

Q: What are you plans going forward and where can we find more of you?

While the band is currently focussed on their live performance schedule and securing places as supporting acts, they currently have two originals in the work. They also have the privilege of having renowned sax player John Mackey as a guest addition for some performances.

Follow @ jamie.rea.musicology and @_petercampion on Instagram for more info and upcoming gig details.
Posted by Eric Pozza at 1:29 pm