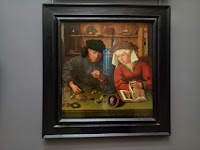 The Louvre is a genuine biggie amongst museums. We started with a few hassles related to tickets, then had to buy new tickets, then got lost in the masses of rooms and overwhelmed with the crowds and the sheer size of this collection. It’s not our first time here, so that first thrill is gone, assisted ably by masses of tourists. And mobiles. And selfies. And poses. Strange that you’d pose with a thumbs up in front of a painting of massive proportions that dwarfs you. But you do. I have a pic (not selfie) problem, too, but I blame it on my CJ journalistic responsibilities! (Yeah, well…) Mona Lisa is now moved so there are lines for that. We had tix for that, just in case, but decided against it. It has been unsatisfying for years now given the distance and numbers trying for their peeks. Luckily, Leonardo’s other three works are still in place rather than moved with ML. That was a pleasure. So were Greek statuary and North European paintings and always Raphael and Botticelli. Botticelli had some glorious frescoes at the entrance to that incredible Italian corridor. I enjoyed the French, too, and they can paint big, Delacroix and David. And some lovely Cronachs and Metsys’s, both favourites. And the standards, Venus de Milo and Victory of Samothrace. Not sure I understand quite the fame of that Venus. And the wings that were closed, because it’s Friday or the renovations or whatever; those we missed. As with the Mesopotamians and the Code of Hammurabi which we discovered last time here, it’s the first legal code known and it's stunning. But so many people and so much genius to pass by. Next time, we plan Louvre as a mid-winter pleasure.

The Louvre is in Paris and it’s busy.
Posted by Eric Pozza at 3:48 pm