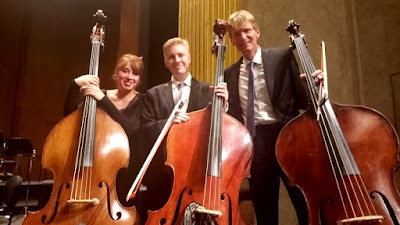 The Orchestre de Chambre de Paris was playing Brahms 4 at the Théâtre de Champs-Élysée and we were there. Not just Brahms, but that’s a favourite. Again, it’s one I’ve played and so it has that special awareness. Megan just knows it as a favourite from ages ago. Also Mozart 25 and Mendelssohn Piano concerto. The Mozart is a pleasure, of course, the theme from Amadeus, and done with ease by all though the quick passages and nicely balanced otherwise. Nice. The Mendelssohn solo was played by Lars Vogt, otherwise the conductor, and he led from the keyboard for various passages here, at least when not otherwise engaged. It’s a busy piece, played with intensity and nicely responded to by the orchestra with limited conducting. But the biggie was the Brahms I had swapped to front row seat so heard and watched as a orchestra member does. I knew the lines, so followed the basses, but also could take in violins and others that are otherwise less in conscious awareness while playing. So the appreciation is different. The pleasure, perhaps, is too. Great joy in hearing the snappy bass, following the bowing, enjoying principal Eckhard’s physical immersion in the music. Another bassist Fabian later mentioned that Brahms’ father was a bassist, so Brahms knew how to write for bass. I didn’t know that and it got me thinking. The orchestra is called Chamber, but it’s a decent size: 3 basses; ~50 performers, including winds and percussion. The sound is different in an old acoustic like this theatre. The upper strings were softer, the sharpness was reduced and the sound more muffled, but not at all unpleasant. And that Brahms was magic. Tight playing, fascinations with the changing passages, exhilaration with the interplays. We enjoyed it immensely. Paris looks to be a great city for music, classical of jazz.