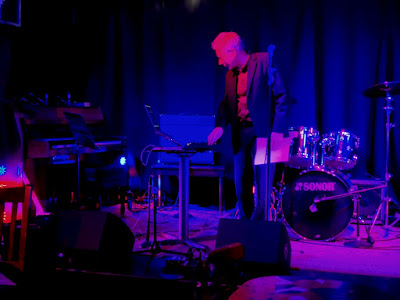 Now this was fun!  Smiths runs an open-mic session called Bang!Beng!Bing!Bong!Bung! and The Pots appeared there in their incarnation as a DJ set.  Well, The Pots playing snippets from Pumpkin Discomforts.  The Pots have produced 3 albums but this was their first outing as a CD launch with Bassist EP doing the transitions and intros and just a touch of effects and giving some introductions and apologies for the tunes ("Beware: Political themes!").  All a good lot of fun even if those political themes were not so rosy, sounding great over Bevan's PA at decent volume, even bringing some dancing shoes out, at least to shuffle about to my fave, Power.  What a fun outing.  I have ideas for another, more live incarnation.  Maybe.  TBC.

The Pots is a project of Bassist EP.  The Pots performed as a DJ set at Smiths.

Thanks to Rich for the pic