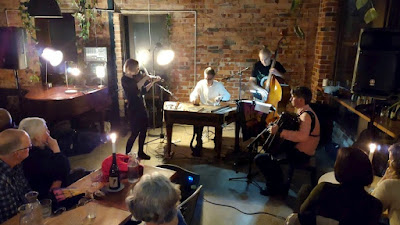 Super Rats has been around a while but this was my first hearing.  They are an impressive and energetic group playing music that I somewhat recognise but don't know.  But it's busy and driving and oddly timed and foreign in many ways.  In language, of course, but also in approach.  And instrumentation, given the core instrument is a cimbalom.  Cimbalom?  A form of hammered dulcimer developed in the Balkans.  Tim gave me a little introduction to the 145-stringed instrument, its techniques and structure.  I got lost after the chromatic bass strings.  The SR site claims Ottoman court music, Balkan peasant folk, Roma (gypsy) music along with a touch of tango and jazz.  My impression was lots of two-feels, jumpy and danceable, entertaining and driving, the sharp and jangly paired notes of the cimbalom at the centre of it all, with a nicely damped, thumpy bass and an accordion that took its share of solos and Pip's blistering violin.  Our group heard some similarity to bluegrass or US folk, but probably the similarity was from Eur to US.  I admired some tricky repeating bass lines and demanding counts generally throughout the group.  There was a readiness to play ostinato behind solos and a resultant drive and thrill.  And some Romanian vocals that were interpreted to much delight.  Not without reason that this band takes its name from a Romanian word meaning annoyed ones.  Not that they were annoyed or annoying, but they to performed it with panache.  Tim was cimbalom, vocals and the core of the band, having studied at the source for some time so this was both authentic and playfully Aussie-local.  And the band he gathered is capable in its own fields (jazz, classical) and eminently satisfying in this.  What a great local treasure: an authentic, modern take on Balkan music.  Saves a trip to Bucharest in these locked-down times.