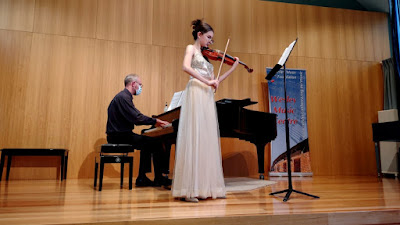 Mila was rushed at first, arriving quite late, for some reason held up.  It showed for some of the Bach prelude that started the concert.  She was playing solo violin this piece, and the arpeggios over the fingerboard gradually got more convincing and settled as she settled.  I have no problem with this.  Then into some confident, rich playing on the following fugue then the Mozart, Ravel and Prokofiev, all with accompaniment from Anthony Smith.  The first pieces didn't surprise me at all, Bach being Bach and Mozart also being his joyous self.  The Prokofiev was different, initially sparse, but then into busy and intriguing, not least the pizz.  It was a violin concerto as were the others, but quite a different beast,.  And then to the most different, very far from Bolero, Ravel Tzigane,  He'd written the piece for Hungarian violinist Jelly d'Aranyi from a commission.  Lots of feature solo passages with harmonics or screeds of notes then into bouncy then dissonant pizz stuff with piano.  Even a touch of danceable fours.  A strange but fascinating piece, no doubt a show piece for both Jelly and Mila.  Mila did it great justice.  So impressed with this intriguing piece of great unexpectedness.  Mila did a great job.   They teach them great and young.