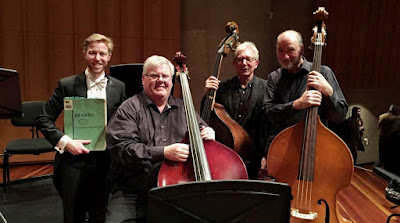 It's been a long road to my Brahms German Requiem.  I missed recording it here in Canberra years back, then heard it days later in Amsterdam, at the Concertgebeouw, no less, under Mariss Jansons, sitting in the back row and entering very informally with the choir, then heard it in English as an Australian Requiem at CIMF2014.  But I finally got to play it.  Despite Lenny's video intros and the rehearsals, I still feel it's a mystery, strangely complex.  But it was a huge pleasure to play at Llewellyn with the Canberra Choral Society and a total of 100+ performers on stage.  There are passages to die for, deeply satisfying, exultant or depairing.  For bass, it's mostly the odd mingling of passages that I find in Brahms. He's nothing like the cerebral order of Bach, or playful neatness of Mozart and still beyond Beethoven.  Not beyond as better, just different.  I had to sit out one movement at rehearsal on the Llewellyn stage and it was such a thing of beauty and profundity.  I expected it, but when playing you are a bit focussed on your part, even though aware of others.  Just to listen was a delight.  So, now it's done.  On stage with Lenny leading, although given Covid/Sydney, he could only rehearse the last week.  Otherwise, Louis Sharpe and Lizzy Collier took sessions for the orchestra alone.  The soloists also were Covid affected, so the Sydney-based advertised singers were replaced by locals Rachel and Andrew.  Regardless, it's a thing of wonder, even if still of mystery.  But I guess that's how a requiem should remain.  Nice, too, to play with a member of the SSO who sat in for the day.  Congrats to the many all.