Flutes and whistles or neither or both 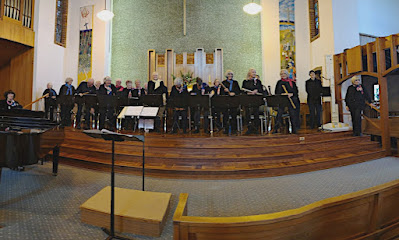 It's a strangely pure and simple sound, even though this was an orchestra and there were a string of different pitches amongst the performers.  It was the Canberra Recorder Orchestra and they played at Wesley, in the church.  It had to be in the church because there were so many members.  I was first aware of the purity of tone from the sub-contrabass.  It's a strange squarish thing, nothing like the image of a recorder, and it was surprisingly loud and present and organ-like amongst the many other ranges.  But it's still essentially the same as the other recorders, ie, a flute with a whistle mouthpiece.  Director Margaret spoke of 10 pitch ranges (I note from Wikipedia that there are 5 ranges in each of C and F) and that only garklein (=sopranino) was missing.  It was a little thing.  There were plenty of lower enders, though: bass and "great" bass and that one sub-contra bass.  Whatever, the program ranged from Handel and Gabrieli through to modern composers and even an Irish traditional piece.  Unusual, perhaps, but nicely pleasant and pure.