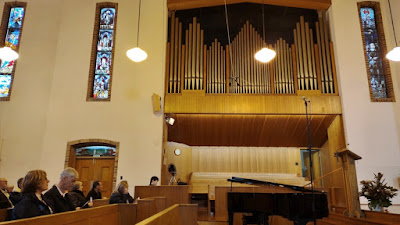 We can be pompous about the arts, their deep connection with our souls and the like, so the sheer entertainment of good company and close relationships or even playful seductions can be forgotten or disregarded.  Even this statement is doing much the same, meaning, intellectualising the everyday and playful.  Linus Lee did a concert that had me bopping in my church pew and smiling big smiles.  He called it European Dance Afternoon.  He played it in the Wesley church, variously with their relatively grand organ and Yamaha grand.  Again, pipe organ in a church is not normally throught of as a thing of playfulness, even less so of seduction.  But it was all there, with the seductive program cover and the polkas and boleros and various dances.  He had a range of tunes, many very well known, from Strauss II, Bartok, Brahms.  I knew Csardas but not Vittorio Monti.  Trust an Italian!  Several dances derived from national folk music, Norwegian or Hungarian or Bartok's Romanian.  SS's Dance macabre.  It was a mix of tones, with the majesty and depth of the pipe organ sandwiching the percussive business of a competently played grand piano.  Linus did both with panache and involvement and joy.  What a wonderful, joyous concert.