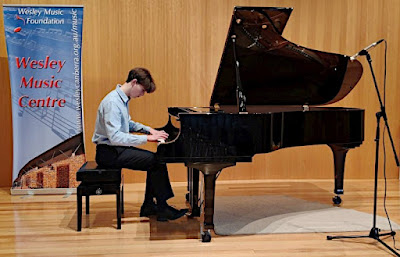 Occasionally you really get a surprise in any field of life.  Mine this time was at Wesley at a piano concert by young-gun Christopher Taylor.  He's still at school, Year 11; it's early in a musical career; he lacks that maturity of age (and tiredness).  Perhaps I shouldn't have been too surprised given he was playing the program from his successful licenciate exam.  He arrived in time but not early, as I've noticed other students do, in uniform.  They come from classes, after all.  His first piece was a Bach Prelude and fugue and that was just a little uncomfy, but he soon settled in with the Bach as a warm-up, into a technically demanding but humourous Haydn sonata and then a seldom played Chopin Fantasy and by this time I was in awe, then a final Miriam Hyde with its own demanding flourishes.  By the end, it was admiration and joy at young talent.  Just astonishing and a great pleasure.