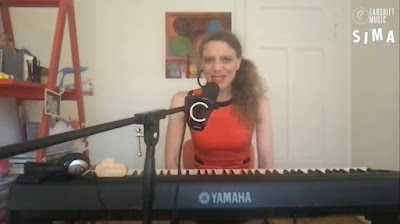 My listen was delayed by a busy evening, but I caught it next morning.  Kristen singing in her detailed, embellished, richly glissed, complex but so well-controlled voice accompanied by herself on piano.  She's a local (Carmila, Qld) but now distant, teaching at HSLU in Lucerne.  The magic of the Net in lockdown.  There were some amusing interruptions, like a promise of a better solo on the album.  She'd wanted a new song for this event, but it was only half finished.  The less amusing interruptions were technical despite a decent connection (tested on speedtest.net) so some disappointment.  But then I remember family calls to Italy as a kid, through an operator, quick and costly, so I can live with occasional problems with free international video.  (I don't think it's just that, but I'll blame a reactionary, politicised LNP for a throwback, yet expensive, $A55b+, NBN nonetheless!)  These tunes are all personal, individual, purposeful lyrics and matching feels.  This is politics of the personal.  One song was He was a loaded gun.  "High on the hill looking down on the common folk...never to blame".  Come to think of it, this sounds possibly political, if expressed more personally.  She spoke of recording with Sam Anning: strange, that, a duet from both ends of the frequency spectrum, of tech and live-streaming with Dan Tepfer and working with others and how ideas are generated and shared, and the essential nature of visual presence, rather than "It's all about the music".  She mentioned motionless curlews here, of some interest to my family!  Even of performing on TikTok during lockdown.  Now that's something to chase up!.  Some very capable singing from a winner of numerous singing awards.  One thing more, I hadn't realised she'd sung at the closing ceremony of the Commonwealth games but little surprise there!  Oh, and TikTok.