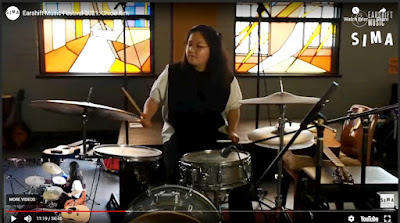 Chloe Kim is an improvising drummer in Sydney, female, born in Seoul.  I wouldn't normally highlight it for mostly a muso is a muso, but Chloe makes an issue of supporting genders and nationalities in jazz (good on her!) and more importantly, she just sounds different.  She performed a short solo piece that wasn't so much virtuosic as melodic.  She explained its structure as in four parts, uke, uke and guitar, guitar alone, guitar and drumset.  She would use sticks on the stringed instruments, giving a sound wonderfully jangly and metallic.  It started with simple 4/4 taps on the uke, undemonstrative, naturally developed, into the most sweet, perfectly collapsing fills and intriguing polyrhythmic lines on snare without snare engaged and toms, not much kick that I remember.  All the time with an awareness that sounded Asian to my uneducated ears.  I could believe that, given her background, of course, and Simon Barker as her teacher, known for his exploration of Korean drumming.  She talked of her solo albums and solo gigs, of strict, planned, disciplined practice with metronome and repetition versus improv over minimalist structure in performance, of imitation as disrespectful of self and the respected.  This last intrigued me but the success in her playing seems evident: there's a personal presentation here, doubly so in solo drum gigs.  Solo drum gigs?  That's challenging and unusual and also revealing of her approach.  Otherwise, she'd prerecorded for this event and that was obviously necessary given her shared housing situation.  But she valued the lessons that this demanded of her.  It's relevant that she'll soon be drumming for a Chicago radio station.  There are new possibilities with these suddenly ubiquitous technologies.  So a fascinating drums outing and a intriguing discussion  Unpretentious but delicious in performance and relevatory in purpose.