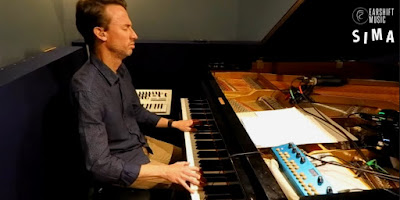 Sean Foran was working some electronics but I just heard piano but that was so good there was nothing lost.  It was a wonderfully intricate and satisfying performance, an improvised mixtape of two tunes (Lynette and Petrochor) with various variations and interplays on the day, minimally planned and open to inspiration.  There was an early buildup, 16 feels, decay to quiet, a 10 feel, some delicious chordal movements moving into two chords in 9, then a floating end with hand plucks on piano strings.  Inspiration might have been hard, given he was playing to a camera in an empty room, but Sean said he preferred that to pre-recording of much the same thing.  There's an edge when you can't redo it, when it's going out as it's played.  As for those electronics, he fiddled them occasionally but I didn't hear them, despite listening on some decent gear.  Maybe they were there in the background, very subtle.  Dunno.  One was a synth; the other a sampler/delay.  But I was transfixed none-the-less.  Host Jeremy suggested influences of Meldau and Keith Jarrett and Sean agreed but they would be influences for any pianist.  He specifically mentioned his teacher in the UK who records on ECM, John Taylor.  Electronics or not, this was up my alley and I was deeply satisfied.