Storms of my grandparents 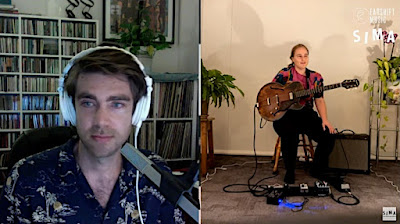 Day 2 of Earshift was Hilary Geddes.  She's a guitarist and composer, now based in Sydney.  Her performance was one of her tunes, When waves move backwards.  It started with soundscapes of tapped strings, then into finger picked arpeggiated chordal passages moving into melody over chords, then gradually more staccato.  She's influenced by that doyen of contemporary guitarists of this style, Bill Frisell.  Host Jeremy mentioned it seemed an evocation of nature or of driving the Australian landscape (which she would have done often enough, originating in Griffith).  She'd written for a small group but was interested in translating to larger groups. Obviously this was not one.  It's actually a work in 3 movements referring to a real experience of a storm while she was camping with her grandmother.  I could understand: our last camping outing ended with a storm that ripped tents and tarps and they were never replaced.  It must be a common-enough experience.  So, meditative guitar with a story for day 2.  Nice.