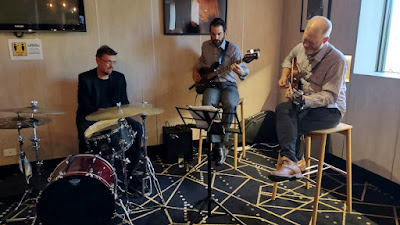 ACT is perhaps the most Covid-vaccinated population in the world (as they are saying) so it's not unexpected that we'd be opening up, and we are.  My first outing to a music venue was for commendable locals, the Greg Stott Trio, at National Press Club.  They played standards and latins and perhaps pop in jazz styles (we heard Eleanor Rigby) and they were just inspirational!  Greg is fluid and swift and inventive; Mark is our local drum gem, stunning me with an open sounding solo of such exhilarating and intellectually satisfying polyrhythms as to drool over.  Bass was Chris Pound on electric.  Chris was once a star student but I haven't heard him for years.  He bio says he's played in USA, England, Poland, Cyprus and Ireland since graduating from ANUSOM in 2009 but obviously now returned to Canberra.  Again, neatly expressive and melodic in solos, not flashy but satisfying.  The lineup at NPC is always impressive and this trio nothing less.  It gets an extra mark given the lack of live playing for a while.  We just caught one set, but mature and capable and wonderfully sharp playing.  Not NYC but it may as well be.