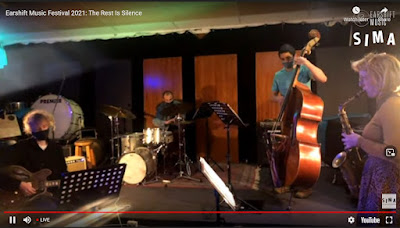 The final night of the Earshift Festival featured The rest is silence.  They played several shorter tunes.  Spacey guitar, slow pensive melodies of alto perhaps with a parallel instrument, guitar or bass.  Spacious, floating, sparse. slow and thoughtful but not lethargic or leisurely and often of growing intensity.  Guitar, jangly and metallic tone, or fingerpicked, 4by4 chords, perhaps bowed bass.  Or bass pizz intro pattern, 6/4, fingerpicked guitar chords, sax intro unison melody with guitar.  Or guitar enters country-ish finger-picked chords, 4/4 with dotted feel, sax with pretty melody into unison with bass then heavy mallet drums and later a heavy slow rock rhythm.  Then my sound dropped out... Then I got sound on my phone...now the chat.  But first another short tune, Gesualdo written by Theo.  Again guitar finger picking in 4, nice melody, divergent drums, perhaps conflicting given his reputation for killing wives and children.  Then the chat of melancholy tunes and slow unfoldings.  They've played together since 2015 and it's a priority.  All members like singable, melodic themes so they start with melody which then may become unravelled over time.  As one said, simple then decomposed.  Only one tune has actually lyrics and they were written after the fact by a friend.  Perhaps "not a typical jazz group" given their subversion of the jazz approach, of virtuosity and solos.  They like collective improvisation, which is a jazz concept if quite old.  Songs are brought by individuals, not yet written collectively, then workshopped.  Initially they are mostly pretty bare.  Maddie brings the most developed pieces, most of which they never perform.  Livestreamed from a Brunswick band hall with mate Kyle on camera.  "Bit of a shambles, but it's a joyful shambles   No people in the room, but there's  still a performance focus".  They would welcome visitors and a live gig again. to "tap into energy of performance".  It was a satisfying, searching, intriguing outing.