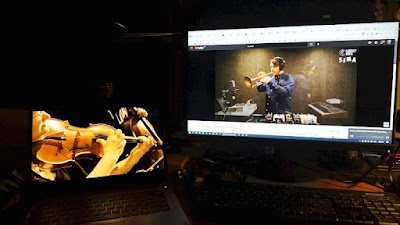 The Earshift Festival started tonight with Reuben Lewis.  Strangely it conflicted, to the minute, with Sally Greenaway's launch for her latest classical composition/single.  I did manage to catch both, just.  Neither had masses of music, which was an advantage.  I'd caught Sally's tune a few hours earlier on YouTube and it's up for more uninterrupted consideration for 72 hours, so that's to come.  As I write this, it seems that Reuben is still available to replay, so that will definitely be a revisit.  And the Earshift Fest will be around for the next 10 days and I hope to catch it all, or maybe just most.  Sally's was a composition for a chamber group comprising CSO players with spectacular technique playing an exploding latin-styled piece sounding all the world of Piazzola.  It was inspired by the Rio Olympics and explores human achievement, complete with a "mad dash to the finish line".  Drivingly rhythmic, latin melodicism and some great playing.  Loved this one.  Reuben was a huge treat too, but in a massively different way.  I must admit I was taken by the jazz chops and the tech presence of it all.  He played three parts, improvised, with his two doppelgangers appearing behind him: laying down pads on a Prophet 6 synth, on a laptop with Ableton toying with recorded snippets of drums and bass from his band, I hold the lion's paw (this last/second album has just won huge plaudits and national awards), and up front on trumpet with a deskful of effects as the third layer.  He played some startling licks on trumpet, so despite his clear love of the electonics, his more traditional skills were hugely satisfying.  But overall, a triumph.  I can have a personal preference, but that's just a measure of my current interests.  These were two very different streams of two very different musics and cultural awarenesses and I'll happily download a copy of each.  So that's my judgement.  A difficult but hugely satisfying half hour or so with demands for a revisit.