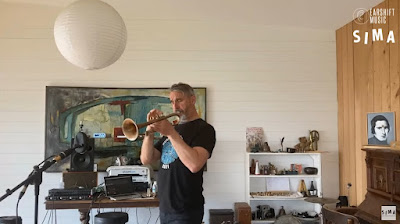 Scott Tinkler tonight for the Earshift Festival from Bruny Island.  Virtuosic playing, super-quick runs, from the top.  Challenging melodic statements of harmony.  Repetition, relations, snaps, staccato,  Then slow, muted lippy notes, querying rapid runs, thoughtful responses.  Overwhelming chops.  Blurted notes, staccatissimi, legato, all manner of tonguing.  And that blistering pace and the rests, the space to consider, to regroup.  Those lines, those fills, so precise and clear.  Glorious!  Alternating quarter notes, sixteenth runs, sixteenth note triplets, quite consistently.  This is day (?) of the Earshift Festival and the music has been and is great.  I am feeling Earshift could be our Sydney ECM to the world.  Not just wonderful and inventive playing but the album releases look great and sound like bells.  I am impressed as I work my way through the catalogue on Bandcamp.  Tonight's gig is no lethargic outing and my first words above make that clear.  The playing is only 10-15 mins per night and, as a fellow player, I find the comments just as intriguing.  Scott spoke of his approach to practice, to play what he wishes to play as a gig, not major or diminished scales but phrases with variation and development.  No preconceived ideas; just "be there and play".  Again Simon Barker was mentioned.  Play phrases; don't fill all the space (sounds Miles-ian).  Inverting the common fears of musos, "silence is tense; playing is comfy".  But despite the emphasis on improv and avoiding endless scalar practice, he did mention daily warm ups with various maintenance routines, too.  He plays brass, after all.  But always thinking harmonically and rhythmically; intuitively, not composed.  But also "you can't bring to the stage stuff you don't have ... that is what practice is for".  As for playing to the Net, prerecorded or live, there's a necessary learning curve and "this is better than nothing".  And a gem to finish: "Get out of stops and analysis, just play, create a problem and solve it, that's improv".  Says it all for an improvising player, really.

Thanks for listening and paying so much attention to detail! Cheers, Tinky

Scott, happy to do it but esp to hear your playing. Eric