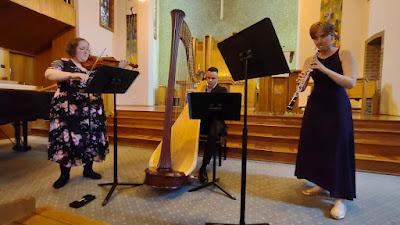 The Bach was instantly recognisable and so was the Morricone.  Not so the Saint-Saens.  A wonderful program, but more than that.  This was a wonderfully performed outing.  I was touched by the effective interplay of violin and oboe, and the softer harp replacing the harpsichord.  Presumably, that's the original, at least for the Bach.  I was enamoured.  Poor Zoe was working between movements to keep her oboe clear and effective.  She succeeded.  This was a beautiful, sinuous tone throughout.  And Lucy's bowing was a great joy, slinky movements but rich tone and a lovely reading, moving in and out with Zoe on the Bach, or just stating with immense clarity on SS.  Rowan's part was different, being harp not keyboard, and less percussive, but always relevant, providing melody but also interesting choices in arrangement.  There was a real interplay between all three.  The SS was just two, Lucy and Rowan, who share a house so presumably play together lots.  Amusingly, their other house share buddy didn't come to the performance; she'd heard it all many, many times.  (Sounds like Megan with my recordings: I understand).  Have I been clear on how impressed I was?  This was a series of wonderful interpretations, at times blissful.  Zoe was a little dismissive of Morricone Gabriel's Oboe, but I'm a big believer in connecting thorough music that people know.  Once connected, people have open ears for new stuff.  And it's an infectious melody.  And the Bach (BWV1060, mvt.III) was a  Philip Adams LNL theme, so also already in many ears.  The SS was rare but just so good.  So in all, I was entranced.  Fabulous concert.