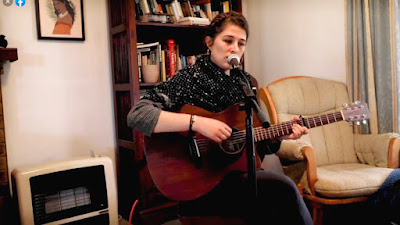 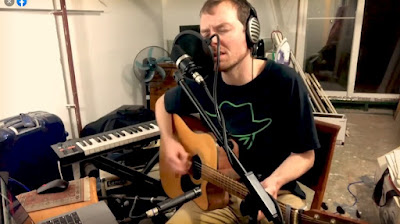 This week, Smiths Alternative and MusicACT presents Rebecca Mann and Small Town Alien, introduced by out host, Nigel.  Again, Rebecca is a singer-songwriter with strummy steel-strung guitar and nice voice and personal stories.  First up, Operate, from her recent live EP.  "I told them, that I'll not operate that way / I told them / I may change another day".  Then Faith, from the EP and also released before as a single.  It's one of her faves.  "I play cards with the Devil as he reached over my head /// You're so full of sorrow / we've both been suffering / Don't you tell me, darling / that you are losing faith / I'll tell you that / I believe in something / but it's not written down / anyway."  Personal stuff.  Then Small Town Alien, from his upcoming album.  First up, the King of Canberra; totally fictional!  About a public servant concerned about the "listening agency".  "I work in Woden / at the Dept of Expression / I'm not Ed Snowden / nor ... / 'cos the agency is listening / always listening ... Call me the King of Canberra / call me the King / it don't mean a thing".  Then into a little rap; funny. "I don't know if this song is anthemic / but I need it to distract from the pandemic".  Cool line and a interesting structure!  Then Heartbreak forever for the hopeless romantics, perhaps entitled Love kills.  "Too ... / Let's walk into heartbreak together / forever and ever / too rich, too poor / too...".  This guy is strummy and purposely nasal (I can talk?) but interesting in music and themes.  The name alone suggests a performance and a character and we get it.  I'm enjoying this.  Short snippets from a series of performers that I've mostly heard of but not heard.  Not always my scene, but always good to be aware of what's around.