One (or four) to remember 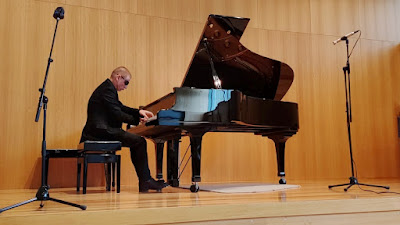 The Schubert impromptus are renowned but I didn't really know them.  Mark Jurkiewicz played the first four (apparently there are eight) them from memory on Wednesday at Wesley.  It was an impressive performance.  He's been entranced by them since first hearing them so I guess they are central to his musical life.  Certainly, they sounded well imbibed and much loved.  They are not really movements, so the audience clapping is maybe to be expected, but it obviously wasn't something Mark expected; he stood and bowed but the breaks were short.  This was a solid performance, a stolid application, an impressive memory and an honest interpretation with real history.  Hugely impressive all round.  Hope to hear the other four next year.