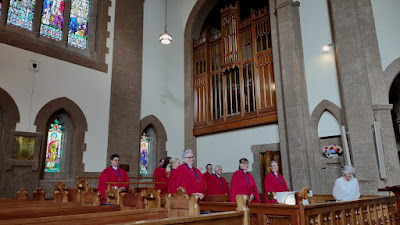 Maybe it was the War or maybe the depression but St Andrews was never finished.  It lacks its dome and nave but it's big and impressive, has lovely detailed timberwork and deco-gothic stonework and stained glass and bells (Ellacombe chimes) and a grand organ.  This was one of the concerts of the Royal Society of Church Music (ACT Branch) and I went to hear the organ and we got a few choral numbers and generally a happy program of Advent/Christmas music.  Nice stuff.  The organ was grand, but didn't sound quite so big in such a large space and it was off in one transcept with a decorative facade to the west with smaller pipes and a cloth-covered facade to the east with the big pipes and the swell.  We heard some quite dainty sounds but the big, deep ones arrived and they are always a pleasure.  The choir sang several tunes which I didn't recognise but there were some obvious ones towards the end, especially taken from Handel or old melodies.  Nice stuff in an impressive location that's awaiting completion.