The priest and the others 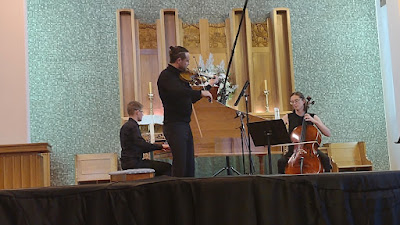 Twice delayed by Covid but finally it arrived.  This was Phoenix Collective as a trio: Dan on violin with the local pairing of Clara on cello and James on harpsichord.  Dan noted they were local baroque exponents (from Limestone, CBE and more) and they were a nice fit for a program of baroque favourites.  It was a change from the normal quartet given Covid.  And what a satisfying program it was!  It was entitled The priest, the intellect, the eccentric and the pirate.  The main composers were four (Vivaldi, Bach, Biber, Pandolfi) with interesting introductions from Dan.  Corelli appeared at the end, probably as an encore (although a generous one with 22 variations on La follia).  Not sure where he fit in those personifications.  Very good playing, too, although there were some issues with balance.  Dan is a pleasantly flashy and entertaining and inventive player and the Corelli and Biber showed this off wonderfully.  Clara was certain and reliable and very present but introspective and the music didn't always demand so much of her, lots of long notes, but a few lines in Bach blew me out, so quick and sharp.  Sadly, maybe from my location or acoustics or just the instrument itself, I didn't catch most of James, except a generous solo passage in the Bach which was lovely.  So the mix was sadly problematic but a great collection of tunes and some capable playing.  I'm charmed nonetheless.