No basement at Pizzagate 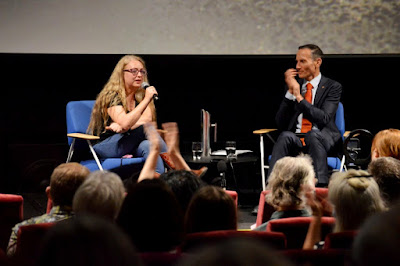 I'd seen Van Badham on a Webinar but still I went to her Meet the Author session at ANU and I'm glad I did.  At one stage she mentioned watching flat faces over Zoom.  I know what that's like.  It's more intense and immediate being there.  You can't break it up to get a coffee so the listening is different.  Colin Steele introduced the session and thanked the ANU Security Team who were in attendance.  Security team?  As we heard more, we understood that VB is targeted and threatened for her stance.  She was speaking to her new book, QAnon and On: a short and shocking history of Internet conspiracy cults.  So we heard of the appeal of conspiracies after distress and of the ego boost of secret knowledge.  Of pathways (including divorce) and especially health movements, yoga teachers and the like, apparently big in Australia.  Of "fusion paranoia" where upset people unite through common causes.  Of rabbit holes and algorithms.  We learnt that the Pizzagate pizzeria didn't even have a basement!  And of Van's relationships to Bonobos.  And of robot dogs used by the AFP and streaker from the Deep State at our recent Canberra demos.  That was new: I'd only heard of the sound cannon.  Of group delusion creating orthodoxy and then loyalties.  Van suggested that we'd been lucky in Canberra, not least through sophisticated policing.  All new and interesting.  She spoke of a long commitment to fighting fascism; of being called a "communist dyke Jew whore" (quite common observations in some circles...).  Of her respect and commitment to democracy; of her family's Union background; of participation and support for democracy being a sacred duty (not a theme I'd expected, actually).  There were stories: Sean Hannity calling Trump a "Blue collar billionaire";  private planes being flown to the 6 Jan attack at the US Capitol.  She spoke of Trump supporters as "overwhelmingly middle class", small business and the like, whose position was threatened, rather than the downtrodden poor as envisaged by the Left.  There was humour but seriousness in her (borrowed) description: "lumpen bourgeoisie".  I liked her preparedness to question both sides.  Then onto her pessimism about US politics, how there was "total capture of the Republicans in the US" by populism, but how some neo-Conservatives of the Reagan era were anti-Trumpists.  There were questions on FB, language and trigger words, the role of feminism in this context, conspiracy thinking in the Canberra protests and its role in the coming Federal election.  She expanded on how techniques in political misinformation are common around the world, with even some statistics shared between US and Australia in one campaign.  I know of much of this: I read about it often enough.  Our exceptional rate of vaccinations suggest that mostly Australians are somewhat immune but she remains deeply worried and so do I.

Van Badham (author) was speaking in relation to her new book, QAnon and On: a short and shocking history of Internet conspiracy cults, at ANU.  She was interviewed by Andrew Leigh (Academic, ALP MHR).