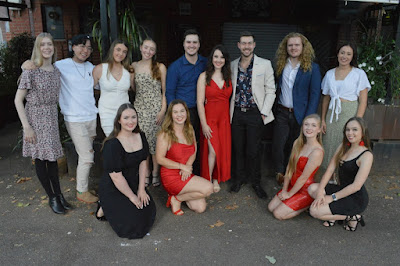 We were at Smiths for a musical theatre gig and it was sold out.  We got in when a few tix became available, but still it surprised me to hear that Canberra is strong on musical theatre.  Kaitlin Nihill said this.  She was the centre of the show, but there were appearances of numerous friends and students and even her mother, a singing teacher at St Claire's.  Kaitlin and partner were up from Melbourne and various audience members were from wherever, but it was mostly Canberra.  I asked someone about this claim for musical theatre in Canberra and I was taken aback by the string of companies she could reel off that have presented over the years.  Then I realised I knew of plenty of them.  I'd even played in Sound of Music at TheQ so perhaps I shouldn't have been surprised.  I like the open and listenable voices of musical theatre, more than the refined unintelligibility of opera.  We heard that, and plenty of forceful highlights and strong vibratos, and ironic and telling lyrics.  Again I like that, even if my experience weakens after West Side Story, great that it is.  One song was of Michael in the bathroom, sadly alone, avoiding a party.  Very NYC, recent, from a short term Broadway show called Be more chilled.  Not one I knew!  There were tunes from Wicked and Phantom of the Opera and Disney and Sister Act and lots of others.  Various and varied voices, male and female, all well trained if at diverse levels, with piano accompaniment.  This music can also be yankee and maudlin or self-centred but it's the show and it must go on.  Kaitlin was an inviting host and the whole was a far-flung survey of the art.  We liked it.  Plenty in the audience knew it.  A small local take on Broadway and the West End.  Well done and much enjoyed and a mega-change from hiphop the night before.