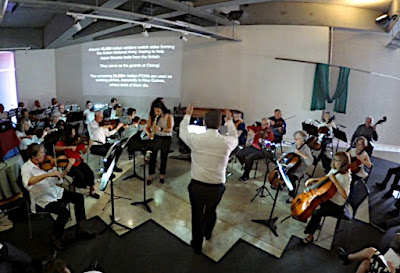 This as a new experience, performing in the Australian Centre for Christianity and Culture, on behalf of the Australian War Memorial, through Chris Latham, currently (musical) artist in residence, doing early work towards a later recording, playing virtually all new arrangements, with soloists from the Army Band and the School of Music.  Some of those things we, as Musica da Camera, have done before but not all together like this.  The program was called Triumph of the Imaginationn and it recalled the experiences of POWs in war, especially WW2.  It was profound at times, telling of fellow support, with one piece from a Jewish internee shipped to Australia and several tunes by FS Kelly, our renowned composer (and Olympian) who survived Gallipoli but was lost, still young, on the Somme.   Our soloists were Edward and Stephanie Neeman on piano and Jaime Grech on soprano sax and Chris himself on violin.  We invited several males to chant for the first piece, a movement of a symphony by Schulhoff, all march-time and bass drone.  This was not a concert to take lightly.  The fast stuff can be relatively easy, but the delicacy required for such quiet or pensive works is a challenge, if satisfying to perform.  So a deep, thoughtful concert helping Chris in his work towards another musical memorial and musical recovery project.