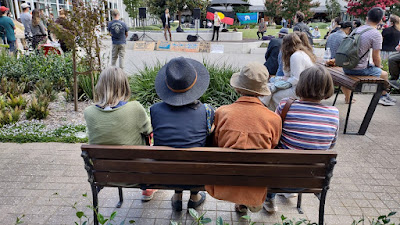 There have been few demos during Covid time but I was hopeful about SS4C returning for a pre-election run.  Doubly so with the clarity of floods and GBR bleaching and +30/+40degC temperatures in Ant-Actic-a.  But it was not to be.  This event was at Kambri at ANU and there were as many enjoying the sun and eating pleasant lunchies while Grace railed and swore over the dangers of climate and the irresponsibilities of our woeful Federal Government.  Two reliable elders presented, both admirable and frequent speakers, Mark Howden, Director of ANU Inst for Climate, Energy and Disaster Solutions, IPCC author and more, and Tim Hollo, Greens Candidate.  They both gave short but strong speeches.  Grace returned with chants that I found too screechy.  Oh, well, it's civilisational collapse after all, not comfy and well deserving of anger even if it hurt my damaged ears.  But then, not concerning enough for many, young and old.  In fact, there may have been more retirees present than students.  This is often the way of demos these days.  We have seen demos ignored over recent times which goes some way to explain a lack of faith in community action.  '60s/'70s Moratoria had influence and thus a generation of marchers persist, but seeing the results of Bridge marches and more, I can understand youth taking a different path.  I just hope they are taking some path, rather than just mental anguish, which is so widely reported as growing.  As for the pollies, Labor is not perfect but they are not "all the same".  That's a myth that suits the Right.  Think Gillard-era climate policies then dismantled by Abbott, or even the Greens convinced not to support Rudd in his attempt.   I just can't understand Right intransigence on climate.  State capture, corruption, influence and the rest, yes, but this is big and quicker than we'd expected and will effect our own kids and, well, it's an end.  Apocalyptic religiosity, perhaps?  Surely not.  It should be criminal - it is acting against humanity - but the law isn't quite so clear cut.  As laws often are not.  So, I didn't manage so long at the SS4C event.  I had an afternoon tea to run to: the way of a foolish Australia with blinkers and none but today's worries.

SS4C (School Strike for Climate) was held at Kambri at ANU.  Mark Howden, Tim Hollo, Grace ... and others spoke.  The next is the Election Climate Strike, Parliament House Lawns, 11am Fri 29 April.  That should be bigger.