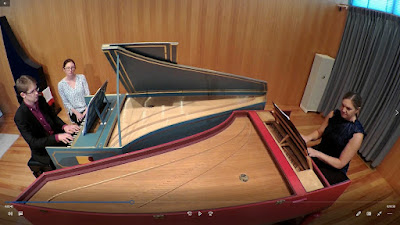 I'd heard the program before but not quite.  Last time Ariana and James were playing within Limestone Consort, with a string quartet and I found the harpsichords, quiet as they are, even raised on the Wesley stage over the strings on the floor below, were still quiet, sometimes lost.  This time, the harpsichords were playing alone, or together, and their volume was theirs, quiet, plucked, perhaps edgy, lovely in that Mediaeval-cum-baroque chamber sound even if still restrained.  They even played much the same music.  The main work was a Bach concerto for two harpsichords (BWV1061), but also a full Krebs Concerto for two harpsichords (I think they only played two movements at the Limestone concert).  The Krebs was written for teacher and student, with one part obviously more difficult.  At one stage in the first movement Ariana was playing semi-quavers, so James' doubled notes must have been demi-semi-quavers.  I know of such a thing (even if I don't have to play on bass).  The other was a strange new/old thing, Thomas Tomkins Fancy for two to play.  James introduced it as an early piece for four handed keyboard, seemingly simple on the page but difficult to put together. They played it on two harpsichords, but close enough.  There were many smiles and maybe some slips but this was a thing of joy, quiet and restrained as harpsichords are, but also challenging and delightful.  I'd dread the tuneups though.  As I arrived, Ariana was tuning then mulled over a retune.  Thus goes period music.  Lovely stuff.