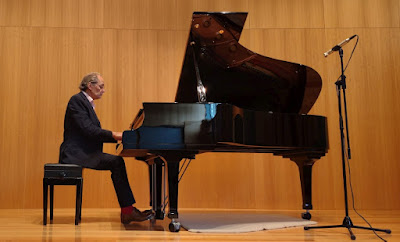 The theme of this year's Canberra International Music Festival is "Pole to Pole".  The link to Schumann, Roland's favourite composer and not featured at all in the CIMF program, is that he suffered bipolar disorder.  Apparently there was much difficulty in his experience and his family but the music is the height of the romantic and Roland's fave.   Schumann was writing at the time of Chopin and Liszt.  Roland played three works, Phantasiestücke (Fantasy pieces) op.12, Arabesque op.18 and Waldszenen (Forest scenes) op.82, and I could see why Roland was so impressed, even if the era is not my fave.  This was complex and satisfying music with considerable visual presence, as in the various named scenes in the forest (Hunters on the lookout, Lonely flowers, Friendly scenery, Wayside Inn and the like).  You could feel these pieces of music as authentic recreations in a way that you often can't visualise even much modern visual art.  Funny that.  And it wasn't just the compositions that impressed.  I love Roland's annual outing before CIMF.  He is such an intense and involving player, playing here from memory and with true commitment and dynamics.  I imagine it as the product of European training, but maybe it's just Roland.  Dunno.  Impressive either way.  Just great stuff.