The air of Poland 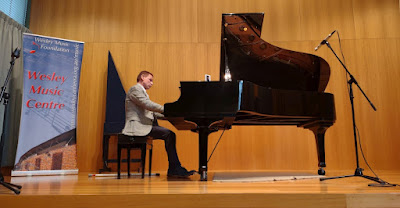 Yeah, it's stuff we know, Beethoven Moonlight and Chopin waltzes and nocturnes, and a very recognisable Liszt Nocturne as encore, but this was special.  Mark Jurkiewicz played the Wesley lunchtime concert and he's s graduate of the Chopin Academy in Warsaw and that background shows, I reckon.  Hugely dynamic, deeply expressive, technically overwhelming, just listen to the way the melodies change hands and how it's all so clear and evident.  Maybe it's the air, but more likely it's the education and, through it, the society it's embedded in.  I remember a story from Elena Katz-Chernin where she compared her training in Moscow to that in Sydney.  Chase it up: it's in CJ somewhere and it's a mind-blowing awareness raiser.  Maybe Chopin's Poland is similar.  Dunno, but this impressed me no end.  And not just the expression and the technique and the rest, but all done from memory.  It's a special awareness and closeness that allows this.  So I can just say how much I was impressed and pleasured by this music, rough sometimes amongst some mighty screeds of notes (especially Moonlight mvt.3) but always telling the story, clear in purpose, huge in dynamics and that expression, always that flow and thrust to tell.  Just fabulous.