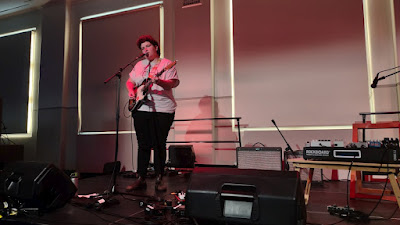 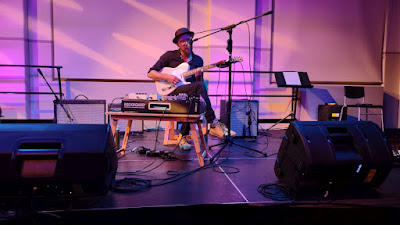 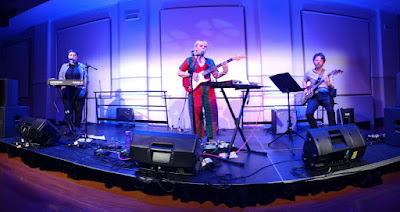 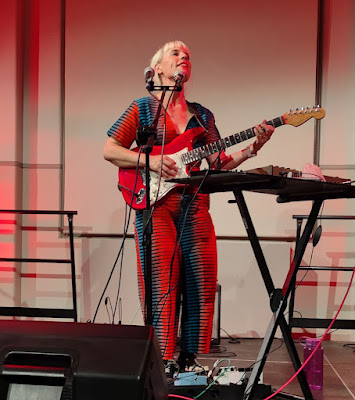 It's an arty locale and this Ainslie Session held at Ainslie Arts Centre was a corker.  Three acts.  First up, Lilly Morris, singer-songwriter from Braidwood.  Braidwood appeared a few times in her introductions.  At least one song was about the unexpected at the local IGA.  A decent voice and a dirty strummed Tele and a pretty low key presence.  I liked it, but of course missed most words for the purpose or intent of it all.  Perhaps an indicator is the one cover she sang, Billy Bragg Milkman of human kindness.  Then Sebastian Field.  I'd heard him earlier on Spotify: voice and meditative drones and effect.  Nice and I thought better on the night.  I loved his voice although he said he's moving more to guitar and effects.  So be it, but the voice was lovely.  Virtually all falsetto, nicely formed and sounding and some intriguing, unexpected intervals when he laid down a chord for his effects unit then sang against it.  I guessed he would have had choir training or experience, but no.  Then guitar played lightly, fingered or plucked, spaced notes grouping though looping and subtly managed effects.  Great stuff.  He performed a 30-min piece with time just floating satisfyingly.  Convincing.  The final was Pheno, Jess Green's modern pop outing.  I've heard Pheno live and online and enjoyed the cleverness, the convincing structure and commitment of it all.  Not flashy, even in the solos which, instead, are tellingly musical.  She plays for big pop acts and the clarity of her solos shows.  We were offered a singalong with the neo-Canberra-intelli-pop hit, We are the Skywhales.  It's one for all generations of, what, Ken Behrens (how I hate that term!).  Nobody sang, but it's an intriguing tune nonetheless.  And others, There are voices out there, Shadow in the water and the like.  And a gloriously personal but joyous and telling tune written in two parts, when each of her kids were in utero, called A little thing.  It takes a mother!  I guess the mention of baby beans on her CD cover are relevant.  Touching and truthful but still playful and melodious.  She played that song solo.  The others were backed by Annie McKinnon, mostly harmony vocals and some synth, and Lachlan Coventry, this day on 6-string Fender bass.  Nice harmonies and very apt and unpretentious bass.  And Jess, on guitar, on vocals, high and clear and telling, and just occasionally on various midi tools, keys and drums.  James Hauptmann was to play drums but Covid sent him into isolation.  Thus the pandemic.  All the musos mentioned how great it was to return to stage but James is just a reminder it's not over.  (For note, SM and DP).  So, in all, a small but appreciative audience, great sound, a wonderful array of musics and some of my fave pop tunes.  Great night.  BTW, there are other gigs in the series over coming days and weeks.  Check out the Ainslie and Gorman House Arts Centre website.