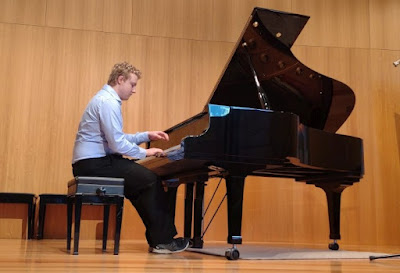 Sam Row returned to Wesley with another concert of French music of the nouveau siècle.  Is that what it's called?  Ravel and Debussy, Paris, 1095 or thereabouts.  The Debussy was four movements of the Suite Bargamasque.  Apparently it's a masked ball or maybe a folk dance of Bergamo, the Bergamasque, including that theme we all know, Clair de Lune, taken from a poem by Verlaine, which was in the program and also seriously showing its age, at least in my reading.  Well, I guess masked balls are too.  The music is interesting, dense as busy but quite light in tone, playful, rippling, intervallic, changing tempi and deep bass but mostly lithe highs.  Then Ravel, his Sonatine, in three movements.  Sam spoke of mechanical soapbox sounds and Spanish folk songs.  Sam plays them with a light touch, perhaps suiting this music, and plays from memory, suiting any music.  I heard musical, serious, again lithe, quite and deanse but never heavy.  Just my take, I guess.  Nice one.