A surface with only one side 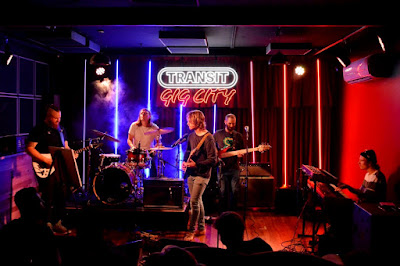 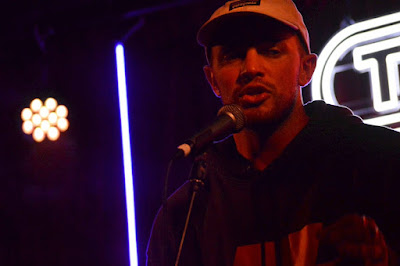 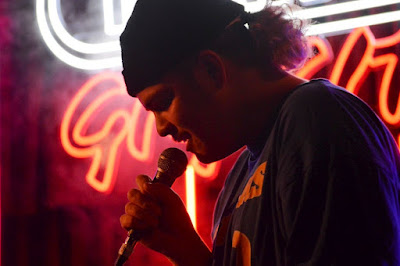 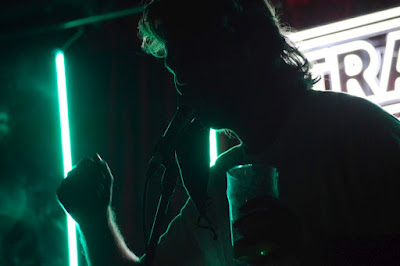 The closest I know is electric Miles, all strong grooves, changes guided by leader Viktor, some solos, effects, edgy chopping guitar.  Plenty of 4-bar 4-beat passages, powered, driving, then a collapse, all spacey, effects and percussion, then back to driving grooves.  I must say mostly driving grooves and that choppy guitar or wah, that match of telling synth and piano passages, accents throughout.  And that bass/drum combo.  Always that insistent, powerful, unrelenting bass/drums combo.  All manner of fingered chops, wah and octaver and drive effects underlying inevitable but surprisingly infrequent guitar solos.  This was more groove than solos or features.  The band was a bubbly, effervescent whole more than a backline and features.  No vocals, yet; this is still set 1. The bass/drum defining the vista and in control.  All telling.  Viktor leading, conducting, imposing with notes on a white board that we didn't see.  He'd offered his guitar as a prize if we could guess the instructions... all the instructions.  Virtually impossible of course, although it turned out to be chords passages, perhaps individually indicated by Victor and occasional stop and starts conducted by him.  Mostly very, very sharp. These players are classy.  Perhaps a 4-feel to 2, then a chord relocation, after hits, a return to drive, whatever, exhilarating.  The music was the Mobius improv jam at Transit Bar and described as improvised experimental hip-hop and progressive/neo soul.  Mobius; nicely named to fit the music: a surface with only one side.  That was set 1.  Then a break and set 2.  Starting much the same, but this was open for improv hiphop vocals and the like.  Performers would check in with Viktor in the break, the band would settle a little and Victor would invite performers up.  I didn't get names, but first up some evident rap, then some singing, then an old fart with spoken word, me, with they said poetry (I guess it was but I call it "spoken word") then a final birthday rave then the band led it out to an end.  Just two sets, two pieces of improv, with those vocals over.  I was impressed with the rapper and singer although couldn't hear much of either.  I asked a few people afterwards if my words were heard: both mentioned Double down, the theme and a repeated line, but not sure they got the politics of it all or followed the words.  Probably not.  Earlier I had tried two locations in the room and both were loud and mushy deep.  So it is in walled spaces, I guess.  As for the musical support, I enjoyed that the band grew in intensity and I went with it, and the repeats of "Double down, double double down" worked to lead a nice diminuendo.  Great night.  These Mobius jams run for the next two Fridays in Feb; free entry, 9-11pm, recommended.

Victor Rufus (guitar, musical director) led the music and event at the Mobius improv jam at Transit Bar. The musicians were Victor with Jamie Rea (keys), Mark Wilson (guitar), Phil Dick (bass) and Rhys Lintern (drums).  And there was a rapper and a singer and Eric Pozza (spoken word) and another party goer.