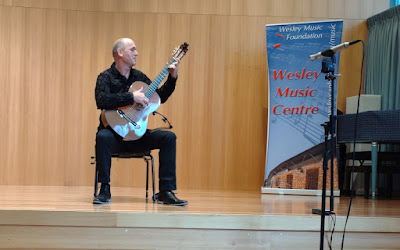 It's not often a classical performance is all original.  Marian suggested that often classical players write but don't perform their music, but I'm not so sure.  I haven't seen it so much but he's in charge of music as Narrabundah College so maybe young ones do. I really enjoyed this concert.  It was the return Wesley lunchtime concert that I record.  Marian plays classical guitar and it's not loud but sharp and clear.   He plays with all manner of classical guitar techniques, of course, slaps and taps and rolling right hand picking and harmonics and chordal play and long intervals and changing tone colour as the picking hand moves over the string.  His compositions were about an athletic mate who was injured and spent years in a wheelchair, always positive, and about Gaudi and about loss in the pandemic and a final arrangement of a string of pop songs.  We chatted about influential pop songs and discovered we shared Yes as a major influence and he picked Sting Fragile as one in his pop arrangement which is a wildly beautiful ballad with a theme of pacifism.  This was also a joyous and intimate outing, about personal experiences and relationships and, dare I say, personal truths.  Marian is professional and has presence but is not flashy, aware and wary of error as musos always are.  Things are never perfect.  Gaudi was still under development; a welcome but also a slight disbelief at the applause, but worth every clap.  A deeply satisfying personal performance.  Thanks to Marian.