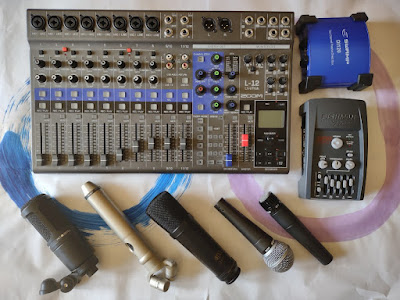 I guess it's apt there's no record of our recording weekend.  It was at home, in the lounge, not perfect acoustics.  It was to be two mornings with Tilt, but James could only do one, so it became Tilt one morning and TED the next.  TED?  Just an initialism for guitarist Tim Foster with Eric and Dave.  It's a change, playing a trio with guitar; different again like a sax trio we also played once.  All different.  I doubt there will be a release from either of the sessions, but it was fun and it's always informative to hear yourself.  We could use various adjectives here - informative, discouraging, hopeful, preening, many more - but such is the way of musicianship.  Given there was no pic for either day or of the studio before its dismantlement, the pic is some gear we used.  Not a Neumann within cooee, but decent none-the-less.  BTW, my DAW is Reaper: ridiculously good for $90.