This time sublime or what? 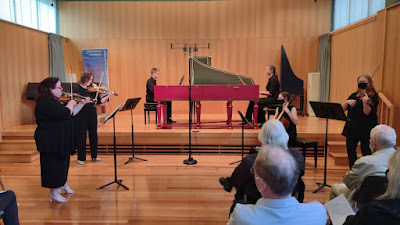 Three concerts in three days and maybe this is the sublime one.  Dunno.  It featured Bach and two harpsichords, so maybe it's more rollicking than sublime.  Either was, I liked it.  Our local mates Limestone Consort playing Avison, Krebs, Purcell and that feature double harpsichord Bach concerto.  LC normally play with one harpsichord and they play on gut at old-time pitch.  This was A=415 with gut and two harpsichords so there was even more tuning than usual but not unexpected.  I found the Bach my favourite, but there was interest elsewhere.  The Avison was a harpsichord concerto, but just one harpsichord (Ariana).  The Krebs was for two harpsichords, but just two harpsichords, so the strings sat out.  The Purcell was a popular piece, well known and used in films, etc, Abdelazer (the Moor's revenge), again with just one harpsichord (James).  Then the double harpsichord act with strings, the feature work from Bach, BWV1061.  Both harpsichords were busy for three movements; strings sat out on one movement or otherwise dropped in features.  This was the most balanced in volume of the concert, but still the strings overwhelmed at times.  I chatted with Clara and she told me they'd had someone with good ears to check balance, so this was the effect of the audience.  Strange that is had such an effect, but very likely.  Acoustics is a demanding thing.  These harpsichords are really not loud, so cello and violin and viola can overwhelm, even with a pair of harpsichords.  But as with all LC concerts, this was relaxed, friendly, informative (several performers spoke and gave composer background info).  Lauren said Limestone is now in its 10th year and given this outing. I hope they continue.