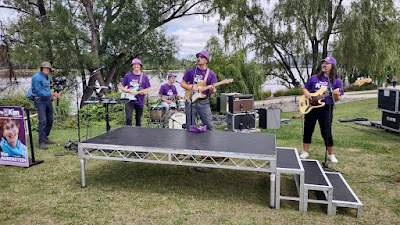 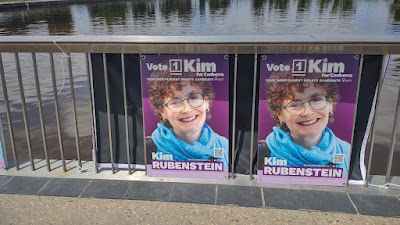 There's a crew that I know who support the Kim for Canberra campaign.  Kim is seeking to replace the Liberals (=Zed Saselja) in the Senate for the ACT.  She's not the only one trying to do so, not least the Greens and David Pocock, ex Brumbies/Wallabies and interestingly a social/environmental campaigner.  So we have a worthy crew to take Saselja's role, but things must go right for it to happen.  Despite the abysmal performance of Morrison LNP it's hard to create change, even in relatively informed Canberra.  So, whatever, I was at the Launch Party on Aspen Island for the Kim for Canberra campaign with my two dogs (black and tan, mini dachshunds, a rescue breeding pair).  They are super cute so everyone chatted or wanted a pat.  In the meantime, I missed the speech but caught a little of the entertainment, a pop, sometime funky outfit called Archie.   Lively, jovial even, homely, vocals and harmonies and two guitars, bass and drums.  Nice day for it.

Kim Rubenstein (law professor, UCAN) is running for the Senate for the party Kim for Canberra arguing (like the independents) especially for the trilogy of corruption, climate and women.  Good on her; good luck.  Archie are Grant Simpson (vocals, guitar), Olivia Faletoese (bass, vocals), Alexander Wanjura (drums, vocals) and Geromy Houghton (guitar, synth).