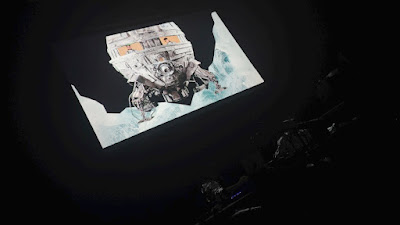 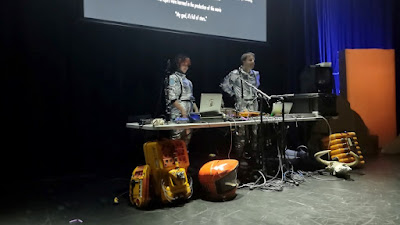 Well, a reference to 2001 A Space Odyssey will attract any boomer.  So too, with Bowie's homage, Space Oddity.  Bowie was inevitably playing the foyer while we were waiting to enter the Rehearsal room at Belconnen Arts Centre.  It was a small audience who entered to find two people in silver jumpsuits at a desk riddled with props and tools and a screen above.  The screen was showing the Destructamatic Films logo (very ironic, tongue in cheek), then into some clarinet over a drone and Also Sprach Zarathustra then through the story told on screen in Destructamatic vivid-vision: the apes and the monolith and the discovery of tools with hammer blows from bones on bones; then modern times and the space station and the Moon and the second monolith and the message to Jupiter; then the space voyage, HAL going PM psycho, the deaths of astronauts and monolith no.3 floating over Jupiter and what else but hyperspace and Bowman's arrival to find himself in a neoclassical bedroom, then aged, then transformed into a foetus returning to Earth.  Now, you might ask what it all means (I'm not the only one to wonder, do a web search) but it's a classic and great to see done in this low-budget, ironic but respectful, cardboard-constructed way as homage to the original.  Mostly this happened on the screen, but our two astronauts did some interactions throughout, especially the HAL scenes, and props from the cardboard original were littering the stage area.  So, what of it?  I enjoyed it thoroughly, but still left wondering why, but 2001 is a sci-fi capstone that refuses to age.  Does it?  Am I wrong there?  Of course I know why.  Maybe wrong again.  But I enjoyed it, not-the-least the cardboard aesthetic of it all.  Great fun with future historical cultural references.