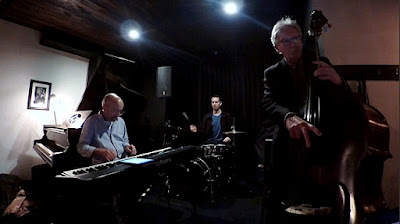 Tilt was booked but could only provide one member for this Molly gig, so it was Eric with Ross Buchanan and Mark Levers.  I'd played with both before on different gigs and they are immensely practiced around town, so other than getting a list of tunes and perhaps some approaches (eg, Giant steps as a bossa) this was no big deal.  It was fun though.  These are standards so I'd played most before and if you can do a latin and a walk and you confirm the key you should be right (I was caught out once on the key this night but only for a few bars).  And do your chare of solos.  In the end, all was well this night.  Pretty loud, outgoing, energetic, responsive to suggestions from Ross, tight and playful.  Ross decided to use his e-piano rather than the house grand, for tuning and projection and varied sounds.  I enjoyed the Rhodes and the rest and was somewhat surprised by an organ for one blues.  Nice.  And I enjoyed occasional stops to listen to a drum solo.  Also picking up a few riffs from ear.  Along with the relatively lively audience, this was fun.  Two long sets (2 x 90 mins; 90 mins is what I think of as a rock gig), a decent break, a few pics and a video and a chat with some heavy metallists, no less, and this was a fun night.  Thanks to Ross and Mark; much enjoyed. 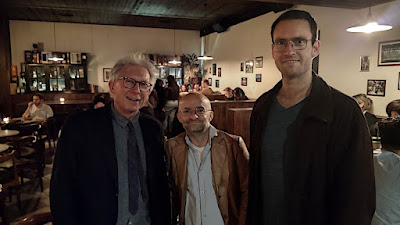