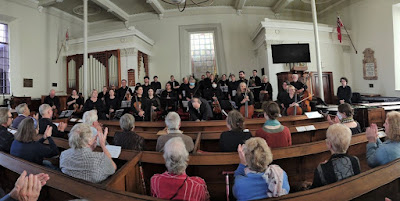 We'd had a jazz gig to attend - tenor, guitar, bass in a bar - but our dinner went too long and they'd packed up. I said hello to the bassist as he left but that's a small satisfaction. But we did catch a classical gig in Hobart. We'd been walking the old Battery Point, the old area with its tiny Georgian houses and large St George's Anglican Church on the hill. This was at St George's. The group was the Hobart Chamber Orchestra of ~35 players from TSO and otherwise, presumably organised as a community orchestra, comprising strings and various wind instruments, even with timpani on the day. Very much in the tradition of MdC and of a similar age (est.1987). The concert started with Nielsen Suite for strings no.1. We'd played it only a few weeks before so this was much on my mind and I love hearing pieces I've played, following along the bass and other lines and the overall interplay and watching the conductor. This was a bigger presentation than that Musica da Camera and I just melted with the lush tone of it all, admired the restrained tempo, enjoyed the tricky quicker lines even if there are not so many. Very nicely, quite professionally done. Then Saint-Saens Intro and rondo capriccioso. Again it's one I'd played so I enjoyed following it. Miranda Carson was solo violin and she played with an earthy, fat tone, quick and proficient. Well done. She's a TSO player. Then a short break and two I didn't know: Shrecker Intermezzo no8 and Chabrier Suite pastorale. The Schrecker was attractive if fairly straightforward. The Chabrier was more trickey, not least a strange waltz to end and various brass throughout. So, a hugely pleasant and impressive outing with the locals. And to top it off, we ran into the remnants of the orchestra celebrating at The Preacher pub after-gig. How's that for shared thinking?