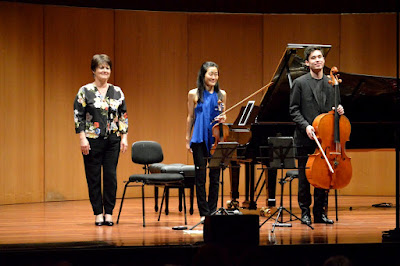 I only get to Selby and friends when someone has a ticket to share.  There was one the other night.  The theme was Tributes and legacies.  The pieces were Ravel Le Tombeau de Couperin, Mendelssohn Piano trio no.2 Cmin and Schumann Piano trio no.1 Dmin.  Just three instruments sounding very different, so their sound were wonderfully distinct and I was taken by their virtuosity, for this it was.  The two strings were perhaps clearer than the Steinway piano, although Selby commented very positively on the piano provided in Llewellyn.  They will be back to the NGA next year so another piano altogether, although the intimacy will make up somewhat.  The works were of an era and hugely impressive.  The playing was, as mentioned, clear and exemplary.   Unfair of me, maybe, but not all my cup of tea, at least this night, even if it was hugely impressive all round.  Not cheap, but that's Llewellyn, too, I guess.  Llewellyn in its chamber guise, curtained at mid-hall, that is.  So, exemplary for the style.