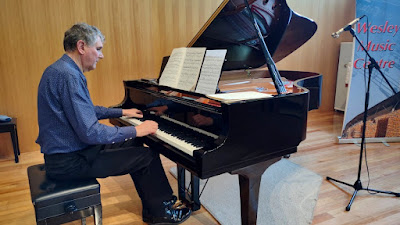 War is overwhelming.  This concert by Robert Schmidli was overwhelming.  He had programmed two pieces written by East Europeans through WW2 and thereabouts.  Borkierwicz was the lesser known, but a Ukrainian who fled Germans and Communists and Nazis, ending up in Vienna.  The work was Three Fantasiestucke op.61 with movements named "Why?",  "A dream" and "... and the Awakening".  The other work was a major one, ~30 mins, the third of Prokofiev's war sonatas, Piano sonata no.8 Bbmaj op.84.  Suffice to say, a huge and complex and loud work, all manner of melody and harmonic changes, fast, virtuosic, hugely demanding.  Robert did a great job, perhaps admitting some slips but hard to notice with this discordant, intense, music of handfulls of notes.  Whatever, the audience was in awe at the end, and I was one.  Blaring and overwhelming.  Something like war, as mentioned.  We are lucky if this is as close as we get.