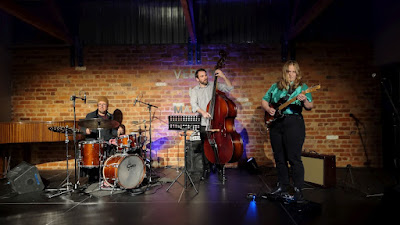 I'd seen Hilary Geddes a few times before so I'm not sure why I was so surprised and impressed by her at Verity Lane the other night.  She was the guest, leading the band, mostly playing standards, perhaps one of two of her originals, playing with the house band, Chris Pound and Mark Sutton.  And John Mackey and Alex Raupach who sat in  later in the night.  Her presence was a clear influence, with abstruse solo lines and deliciously dissonant chords which twisted and distorted the backing, so what might be a standard solo just needed to be altered to fit.  Just what those were, I wasn't always too sure.  And she was such an influence despite a relatively low volume.  I thought too low, so sometimes a bit lost, but maybe that's another of her influences that made for a different music.  It all brought out strong, rudimentals-oriented drumming from Mark which is something I love to hear.  And Chris with a wonderfully strong, upper-mid-rich tone, quick lines, plenty of chordally aware playing through the range was a dream, even if he sometimes seemed a little reticent in the context, even while he was playing a storm with glorious tonality to my ears.  John responded too, although the colours and sheer speed of his cellular playing was an overwhelming storm of its own.  Alex was more lyrical as trumpets often are, but again explosive at times.  But that harmonic colour and abstruse soloing did it for me.  I spoke with guitar Greg after and we were musing over where the influences were from, from jazz but also from rock band exploits that Hilary indulges in.  I increasingly admire work across boundaries, within music and further afield, so I remain hugely impressed if a little perplexed about the whole, this night of standards in a noisy bar with a most intriguing new player. 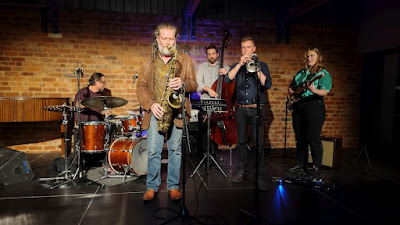