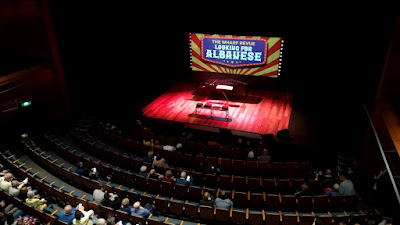 First up for the night was the Wharf Review, this time called Looking for Albanese, obviously channeling Looking for Alibrandi.  Also obviously with suggestions of a tentative government, perhaps justified after 2019.  Again the four Wharfies, variously musicians and scriptwriters and singers and performers.  The themes are various characters in Australian and occasional International political matters.  The short sketches are (almost?) always pop or musical numbers rethemed and relyricised.  Oh, and a lengthy rhyme from Katy Gallagher as Finance Minister.  The whole started with four singing dummies then through all manner of pollies.  I noticed a preponderance of skits on Labor matters, no doubt following the election that trounced Morrison and his do-nothing spendthrifts.  I don't think Dutton, leader of the opposition, even appears (think Yepon/Yeppoon: I have no idea of spelling but I'm not from Queensland unlike Dutton).  Barnaby and Katter as apt.  Jackie Lambie appeared as a boot-skooter to introduce and sing at Tamworth.  The Greens got a spot as the alt.Wiggles.  Amusing if pretty obvious.  There was a fabulous scene of Gillard, Keating and Rudd at National Conference.  Similarly, Albanese was consistently believable.  The night started fairly tame, I thought, with limited laugh and applause, but finished with a take on West Side Story and Albo and mates, with dance/song numbers from the Rumble and Gee, Officer Krupke.  Most impressive and the biggest laugh and best received and apt as the last number of the night.  Not the belly laughs of previous Wharves that I've seen, but they are a hoot.