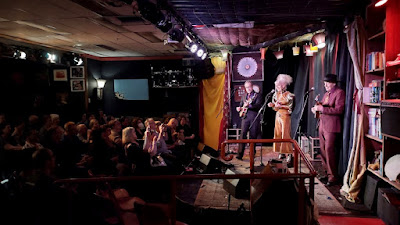 Bowie died a few years ago, aged 69, just 2 days after his final album, Blackstar, was released.  Liver cancer.  I remember him from his earliest days of fame, as Ziggy Stardust, released 1972.  It was just an amusement, I thought, when I suggested to Megan and a few similarly-aged mates to attend The Thin White Ukes at Smiths: a trio (1xfemale, 2xmale) performing Bowie and specifically the Ziggy Stardust album on vocals and 3 ukeleles (!)  Well, just derivative perhaps, but the video was an amusing outing live at a fair with interactions and good harmonies, so why not.  In the end, I found it a much more intriguing affair, as I entered into some Bowie I didn't know, and listened more intently to words.  The band did an amazing job: first set was the album in order, even marking the end of side one with clicks and pops (after track 5).  Then a break and a second set of 11 songs, one lesser known, at least to me, Slip away, but lots of renowned tunes: Fame, Let's dance, Sorrow, Rebel rebel, Space oddity of course, Heroes, The man who sold the world.  Just hearing the list makes me realise I know more of Bowie than I thought.  A few faves that I might have requested (funkies  Young Americans and China girl) didn't even get a mention.  And they put on a great show.  Costumes, especially on Betty, and patter, wry but not too much.  Some history.  Really impressive harmonies that channelled the originals with real respect.  Surprisingly effective instrumentation from just three ukes (oh, and one Stylophone solo, $50 on eBay).  Even the funky tunes worked; Fame was great if Let's dance was more a challenge.  I'm told they  also play with a drummer but he couldn't make it to Canberra.  That's too bad.  I was air drumming throughout (mostly snare on 3, syncopated kick, hi-hat on the beat = rock); it was duly  immersive.  I was touched by some of the lyrics; blissed out by the harmonies;  intrigued by the performative nature of the music; several times intrigued by some wonderfully effective and unexpected chord changes.  There was much to this man, Bowie, as a performer but also for his stories and themes.  It's got me looking into Wikipedia for his history and life changes (what's your name, what's your name).  All this through a band with authentic presentation and glorious harmonies with due respect for Bowie's genius.  So this guy was more than I'd expected and this band reminded me of that.  Great night and thanks to the Thin White Duke and the Thin White Ukes.

The Thin White Ukes performed The rise and fall of Ziggy Stardust and the Spiders from Mars and 11 other Bowie songs at Smiths.  The TWUs are Robert Stephen, Betty France and Michael Dwyer (vocals, ukelele).