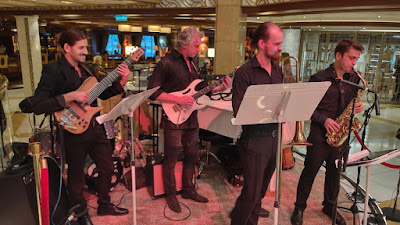 The House band is always the theatrical support, the readers, the jazzers. This one was led by Argentinian bassist Emilio. He'd just taken possession of a new hand-made six-string fretted, 30-inch scale, modern design, neck through, kitted with flatwounds. I didn't recognise the pickups he named (like Bartolini) and don't recall the preamp. Thus do two bassist speak! He's also the head off music on board. We chatted about more and broader things than just music, learning of Argentina and family, not least an aunt who has performed as Evita and more on Broadway and the West End. Very cool. And his interest in composition, experimental, contemporary, if I understood correctly. So an interesting interaction. The band was made up as a recent combination: tenor and drums from US (Chicago?), guitar from Poland. Not sure of the trom. I haven't caught them yet in a reading role but maybe will tonight (the curtain is fixed!) but they have done light jazz in the main Piazza and more challenging and interesting outings in another, smaller, later hour bar. Good stuff. 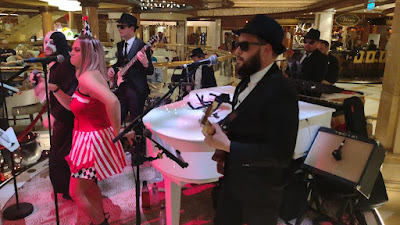 Perhaps my most immediate joy is from Meridian. It's a pop/covers sextet with male and female vocals, guitar, bass, keys, drums. The core, keys, bass, drums, is from Liverpool and presumably pulled the band together for cruising. The singers and guitar have just been with them for a month or so. Nonetheless, they have an impressive repertoire of hits of the decades and do it well. A male vocalist with an unusually high voice that combines well with a higher female with a cutting, slightly nasal but pleasant voice and a guitar to let go for solo. The backing otherwise is solid and supportive and constant, as befits the music. Just great fun with a playlist to entertain and authentic arrangements and interpretations. Fun. Beatles, ABBA, Blame it on the boogie or Motown or more; I thoroughly enjoyed this band.