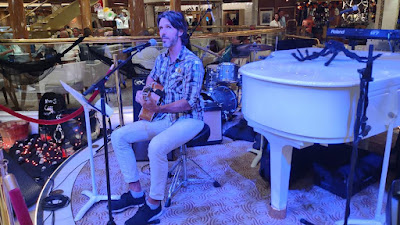 The soloists are easy to identify. Cameron Dunbar was an Aussie pleasure. A strumming guitarist singing popular, often country-ish songs or singer songwriter fare. Satisfying interpretations of a string of songs we all know and a pleasant demeanour and a light and expressive touch on the strumming. The style tends to the background, but he'd done it well and he had a following. 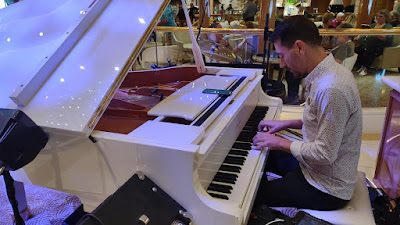 George Statescu was the classical pianist, Eastern European as is often the case with the classical performers. First up, I heard him tending to the Chopin, Liszt, romantic era and the intensity of the Russians. Sometimes fairly subdued, other times laying into the emotionally heavy. But at another outing, it was the standard Secret love then into some pop rock number, so I was a little flummoxed. Again one with listeners rather than dancers. I had expected no surprises, but in the end, I was surprised! As for surprises, I even saw him sit in with the House band one night.