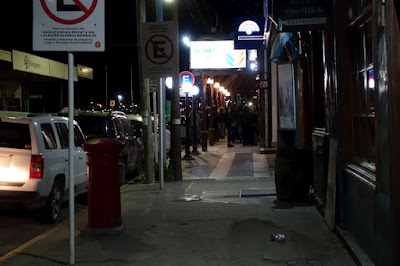 Now this post is unexpected.  This is Ushuaia.  Dig the location: Ushuaia, Tierra del Fuego, Patagonia, Argentina.  The surrounding mountains with slips of snow are spectacular.  It's great weather and the locals are out in t-shirts (not all!) even if the wind chill factor is serious around every corner.  The tourists have scarves and hoods.  But there's a Hard Rock Cafe and it's Saturday.  One section of the main street is blocked off and there's a seriously decent PA set up.  First up, we happen on the local drum band, La Famiglia del Tambor.  They are having a great time, rollicking with drums of all sizes, tight as, led by a conductor, sharp and smiling with the best.  Loud.  But loud it is for the Municipal Band, too.  Now this is no ordinary Municipal Band.  First up, I thought Big Band given bari, tenor, several altos, sop saxes and a few clarinets, then I see four brass, trumpets and troms.  Then surrounding them the rock rhythm section, piano, bass, guitar, drums, percussion, two singing.  They start up with great grooves, reggae gets a look in, but it's mainly shades of latin, alive, loud, with decent singing.  I ask the name and I'm told "the Municipal Band".  It doesn't do them justice.  People are dancing in the street.  Behind me, more painted symbols for Mothers of the Plaza de Mayo.  Down the road, a large meeting hall with pics of Perons.  I'm somewhat confused by these stories, the Perons being variously lefty and populist and perhaps other.  But there's plenty of time for all this: the sun doesn't set until 10.30pm at -55deg. This is Argentine Terra del Fuego, within a stone's throw of Chile and it's a surprising place. 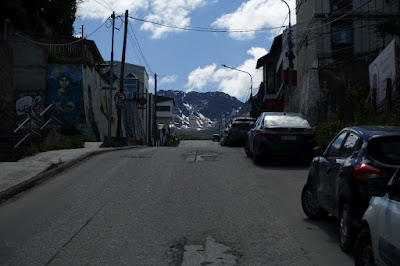 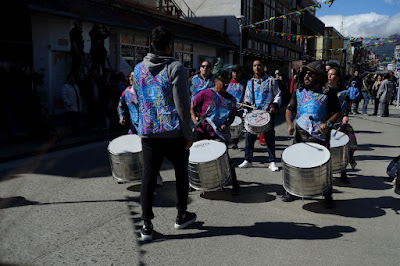 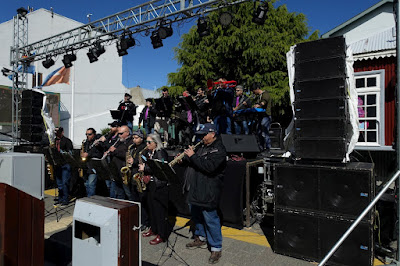 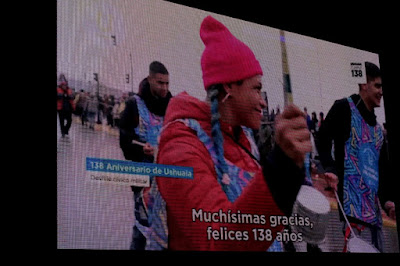